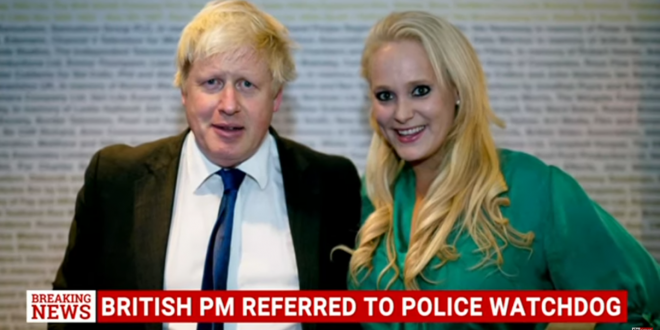 British Prime Minister Boris Johnson has been referred to a police watchdog over his alleged relationship with an American businesswoman when he was mayor of London. On Friday, the Greater London Authority (GLA) said in a statement that it has asked the Independent Office for Police Conduct to assess whether it is necessary to investigate Johnson for the criminal offense of misconduct in public office.

“Allegations have been brought to the attention of the Monitoring Officer that Boris Johnson maintained a friendship with Jennifer Arcuri and as a result of that friendship allowed Ms Arcuri to participate in trade missions and receive sponsorship monies in circumstances when she and her companies could not have expected otherwise to receive those benefits,” the monitoring office of the GLA said in a statement.

The US businesswoman embroiled in a conflict of interest row over her close friendship with Boris Johnson won a highly sought after entrepreneur visa to stay in the UK after securing the prime minister’s endorsement for her firm, the Guardian has learnt.

Jennifer Arcuri, whose company is being investigated over its eligibility for a £100,000 taxpayer-funded grant, spoke publicly of her difficulties in obtaining a visa.

But just months after Johnson helped to raise her firm Innotech’s profile by giving keynote speeches at two of its first events, Arcuri won a place on a prestigious government-run visa scheme, giving her firm £15,000 in public funds.

Boris Johnson will comply with a London Assembly order to explain his links to a US businesswoman following claims he failed to declare a potential conflict of interest when he was London mayor.

The Sunday Times said Jennifer Arcuri joined his trade missions and received thousands in sponsorship grants. The ex-mayor said his former colleagues were “barking up the wrong tree”. The PM was given a two-week deadline on Tuesday to provide “details and a timeline of contact” with Ms Arcuri.

In a letter addressed to Mr Johnson and dated 23 September, chairman of the Greater London Assembly oversight committee Len Duvall, said he wanted the “details and a timeline of all contact” with Ms Arcuri.

Oh for goodness sake can’t a married, middle aged man, in a powerful job with an indeterminate number of children,have a much younger woman as a best friend, who he visits in her flat & accompanies him on overseas trips funded by the tax payer, anymore? https://t.co/GwYZzwGhEJ

It’s almost as if Boris Johnson’s incendiary language and stoking of hatred might also be to distract us from something else. https://t.co/nsS3bISFdj

Previous Flake: 35 GOP Senators Would “Privately” Impeach
Next Trump Rages About “Do Nothing Democrat Savages”