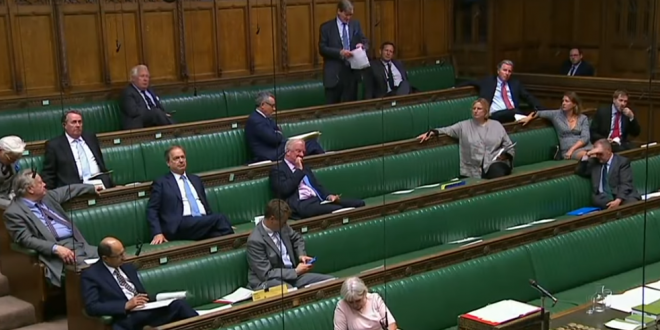 Former chancellors, Winston Churchill’s grandson and the current longest-serving MP have all been sacked from the Conservative Party for rebelling against the government in a bid to avoid a no-deal Brexit.

The 21 Conservative MPs – many of them decades-long Tory loyalists – helped inflict defeat on Boris Johnson in his first major vote since becoming prime minister, winning a vote to override a Commons rule that says only the government can propose new laws.

The group, along with opposition parties, will use their chance on Wednesday to try to get Mr Johnson to ask Brussels to delay the Brexit deadline from 31 October to 31 January 2020 – a date the EU would ultimately be in charge of.

Being sacked from the party doesn’t mean removal from Parliament but the former Tories will not be able to run as Conservatives in the next election. The video at the bottom of this post is live.

If @BorisJohnson confirms that 21 Remainer Tory rebels will be kicked out of the party, that would be an act of real leadership.

With 21 Tories losing the whip and Phillip Lee crossing the floor, Labour with SNP & LDs now have a notional majority of five.

“Why wouldn’t you ask to form a Government and take control of Parliament?”

-Are you concerned at the direction of the party?
-Are you upset by the decision to expel 21 loyal/hardworking MP’s?

So are we. Join us for a demonstration at CCHQ, to tell them how we feel.

“I got a text from the Whip” – @RoryStewartUK is among the 21 Tory MPs who have been deselected by the part for voting against the government.

Rory Stewart has condemned Boris Johnson for removing the whip from 21 Tory MPs.https://t.co/QX9TUMM2x9

A look at how the Government and Opposition benches stand after 21 Tory MPs lost their party whip. pic.twitter.com/zVIkMrI2Hl