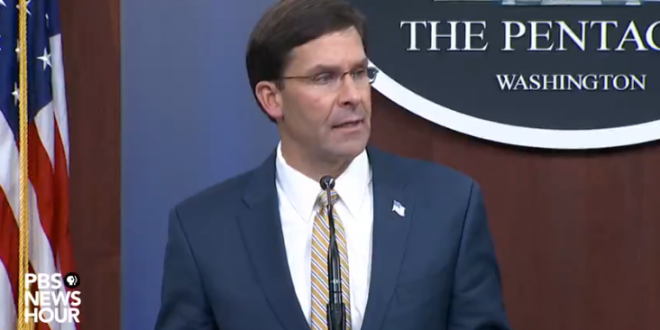 In a press conference Friday evening, US Defense Secretary Mark Esper and Chief of the Joint Chiefs of Staff Gen. Joseph Dunford announced the US would be sending “hundreds” of US troops, as well as additional air defense capabilities, to Saudi Arabia and the United Arab Emirates.

“The president has approved the deployment of US forces which will be defensive in nature and primarily focused on air and missile defense,” Esper told reporters at the Pentagon. He noted that the US doesn’t seek war with Iran, but “has other options” as well.

Dunford said that decisions on specifics will be made over the weekend, with details announced next week, but noted it would be a “moderate deployment” that would not include thousands of troops.

Trump in trouble over this Ukraine outrage. Def Sec, fresh from a meeting with Trump, announces at the Pentagon that we are deploying troops to Saudi Arabia. Apparently we are doing this alone and not with other countries. @SpeakerPelosi, you still don’t see a problem?!

Want to distract from the growing whistleblower scandal? Start a war. Like now. The Pentagon will deploy US forces to the Middle East on the heels of the Iranian attack on Saudi Arabian oil facilities https://t.co/3C7JiTlZGp

The plot of Wag the Dog was actually more subtle than this https://t.co/YDsF4teQ4T