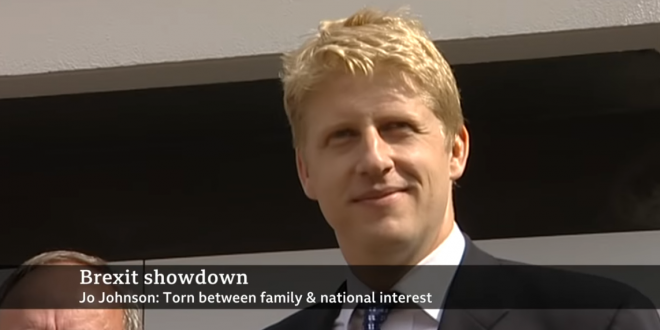 Jo Johnson, the younger brother of Prime Minister Boris Johnson, is resigning as an MP and minister, saying he is “torn between family loyalty and the national interest”.

The business minister and Tory MP for Orpington, south-east London, cited an “unresolvable tension” in his role. Mr Johnson voted Remain in the 2016 EU membership referendum, while his brother co-led the Leave campaign.

BBC political editor Laura Kuenssberg said it was “unbelievable timing”. Mr Johnson’s resignation follows the removal of the Tory whip from 21 MPs this week for supporting moves to prevent a no-deal Brexit.

"Only a socialist would shaft his own brother…" @BorisJohnson in 2013 pic.twitter.com/L2ol47IiZ7

If his own brother has no confidence in Boris Johnson, why should anybody else? ⁦@BorisJohnson⁩ #BrexitShambles #StopTheCoup https://t.co/E5WJrkwPl2

JUST IN: Boris Johnson’s brother says he'll quit as a minister and a member of Parliament because he doesn’t believe the government is working in the national interest https://t.co/Rv18KrtkHH pic.twitter.com/XLNOsQbdsH