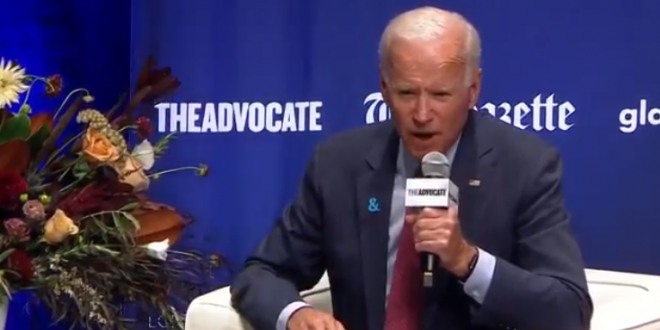 Former Vice President Joseph R. Biden Jr. found himself fending off new questions about his decades-long record on lesbian, gay, bisexual and transgender issues, in a testy exchange with a female moderator who described his treatment of her as “condescending.” During a Friday night forum focused on L.G.B.T.Q. issues, Mr. Biden seemed to recoil from the direct questioning from Lyz Lenz, a Cedar Rapids Gazette columnist.

In a question-and-answer session, Ms. Lenz repeatedly pressed Mr. Biden about his past votes for the Defense of Marriage Act, the military’s “don’t ask, don’t tell” policy that forbade openly gay people from serving and his statement earlier this year that Vice President Mike Pence, known for his socially conservative positions, was “a decent guy.” Mr. Biden sought to defend himself, reminding the audience that he supported same-sex marriage before President Obama. “I didn’t have to evolve,” he said.

It was a refreshing display that is rarely seen in what is usually a very choreographed back-and-forth between a journalist and a presidential candidate. The moment seemed to throw Biden off as well. Lenz tweeted he told her backstage that she was a “sweetheart,” which she told the New York Times she felt was “condescending.”

Lenz later similarly pressed Sen. Kamala Harris on her handling of a case as California Attorney General over trans-affirming health care for a trans inmate. Harris has continuously made excuses over why her office pushed the case, first saying that she was just upholding the current law and then saying that her staffers handled the case without her involvement.

Biden was asked about the fact that his crime bill has had a disproportionate impact on LGBTQ people of color, which he denied. He flubbed an attempted stand on the issue of housing transgender inmates by their gender identity, not natal sex.

“In prison, the determination should be that your sexual identity is defined by what you say it is, not what in fact the prison says it is,” Biden said, mistaking sexuality for gender identity.

He touted his endorsement of same-sex marriage before President Barack Obama — seen as a political mistake at the time — and he promised to ensure that LGBTQ status could never be a barrier to healthcare access. “Thank you for all you’ve done to liberate all Americans. You’ve done a lot,” Biden said to the crowd as he departed stage.

An attention grabbing moment from Biden’s time on stage when moderator ⁦@lyzl⁩ pushed Biden on past votes and calling ⁦@VP⁩ a “decent guy.”

“You’re a lovely person,” Biden tells the moderator to laugher.

As I was walking off the stage with @JoeBiden he said to me dryly, “You’re a real sweetheart.” #LGBTQforum

.@JoeBiden takes a moment to thank the LGBTQ community’s “courage,” saying the credit for legalizing same-sex marriage isn’t his own to take. #LGBTQforum pic.twitter.com/w9SYw6aw4C

Before tonight’s #LGBTQforum in Iowa, I shared why I believe everybody deserves to be treated with dignity and respect under the law — regardless of who they are or whom they love. pic.twitter.com/h53usuqLA9

WATCH: Fmr. VP Biden is asked at LGBTQ presidential forum why he should be trusted not to compromise on issues, following statements Biden made praising VP Pence as a “decent guy.” pic.twitter.com/u88WbzCKYj