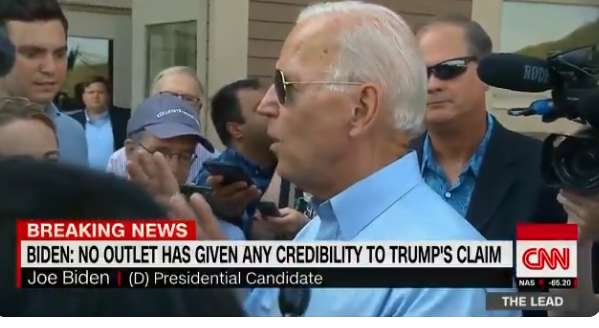 Democratic presidential candidate Joe Biden dismissed President Trump’s call for an investigation into the former vice president’s ties to Ukraine amid conservatives’ accusations of misconduct. “Not one single, credible outlet has given any credibility to his assertion. Not one single one,” Biden told reporters Friday. “So I have no comment except the president should start to be president.”

The comment comes after reports emerged Friday that Trump pressured Ukrainian President Volodymyr Zelensky during a phone call in July to work with Rudy Giuliani, his personal attorney, to investigate Biden’s son, Hunter. Trump did not deny the reports on Friday, telling reporters, “it doesn’t matter what I discuss.” Giuliani at first denied and then acknowledged that he had asked Ukraine to look into allegations against Joe Biden.

Joe Biden reacts to reports that President Trump repeatedly pressured Ukraine’s President to investigate Biden’s son: “Not one single credible outlet has given any credibility to (Trump’s) assertion. … The President should start to be President” https://t.co/Vyrfcgkqv1 pic.twitter.com/Qy7gb5mOZT

Previous Pelosi: Pass New Laws So Presidents Can Be Indicted
Next BREAKING: Pentagon To Send Troops To Saudi Arabia