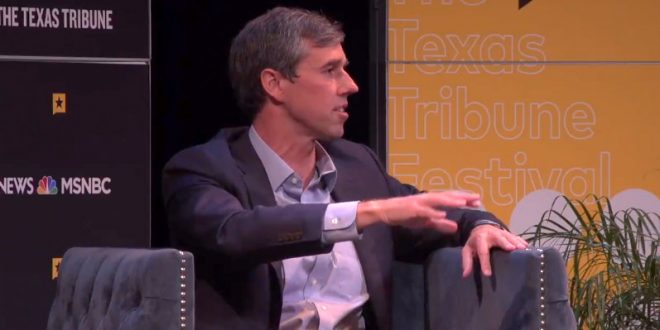 Beto: I’m Not Dropping Out And Trump Must Resign

White House hopeful Beto O’Rourke on Saturday called on President Trump to resign amid mounting scrutiny over his dealings with Ukraine.

The former Texas congressman argued at the 2019 Texas Tribune Festival that “the best possible path” for the country would be for “this president to resign, allow this country to heal, and ensure that we come back together with the greatest, most ambitious agenda we’ve ever faced.”

“None of it possible while he remains in power,” O’Rourke added. “I’m calling upon those who are close to President Trump now…who right now are complicit in what the president is doing to advise him to do the right thing and to resign from his office.”

.@BetoORourke says he’s not dropping out anytime soon and will stay in the 2020 campaign until the very end. “I’m in all the way.” #TribFest19 https://t.co/GdbbkfRt0N pic.twitter.com/lgQJzwP6aX

Previous Stormy To Get $450K After Arrest By Pro-Trump Cops
Next Former Colleagues: Giuliani Should Be Prosecuted