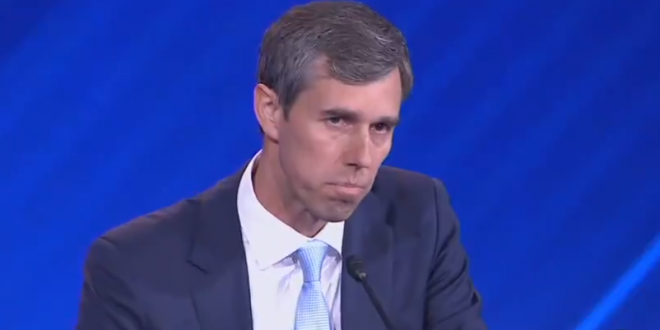 Beto At Debate: Yes, We’re Going to Take Your AR-15

A month after a gunman opened fire at a Walmart in his hometown of El Paso, killing 22 and injuring more, Beto O’Rourke stood onstage in Houston and was asked about his proposal to buy back military-style assault weapons.

The question, during the third debate among Democratic presidential candidates, came after several of his competitors had praised his advocacy for gun control in the aftermath of the mass shooting.

“Hell, yes, we’re going to take your AR-15, your AK-47,” O’Rourke said. Critics call his proposal confiscation. O’Rourke said the weapons have to go when they’re being used against children. He described meeting a mother who watched her daughter bleed to death in Odessa after being shot with an AR-15.

If you threaten to kill a presidential candidate you should not have a gun pic.twitter.com/YqkzXaer2U