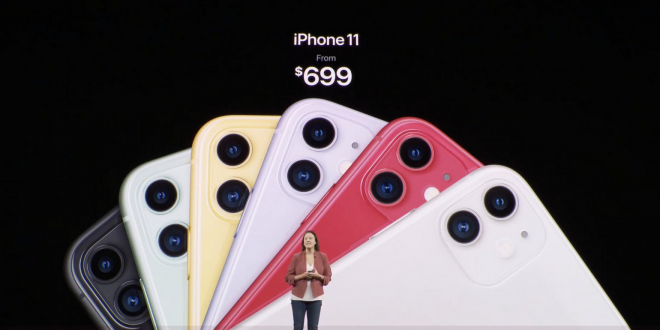 I’m sure this all means something:

At its September event today, Apple has officially unveiled the successor to the iPhone XR. The new iPhone 11 packs a dual-camera and more.  The iPhone 11 camera setup includes wide and ultra-wide lenses, rather than wide and telephoto like many people had assumed.

This gives users the ability to adjust cropping and zooming in post production. There’s also a new night mode that comes on automatically, brightens photos and reduces noise in low-light situations, as well as a next-generation Smart HDR.

QuickTake is a new video recording feature that makes it easier to take videos by long-pressing on the camera shutter button. Video is 4K quality at 60 fps, as well as slo-mo, time-lapse, and expanded dynamic range. The front-facing iPhone 11 camera has been updated to 12MP with wide angle selfie support in landscape. You can also take 4K video at 60 fps, as well as slow mo videos.

Apple took the opportunity to introduce us to some new games for its upcoming all-you-can-eat game subscription service, coming later this month which will run $4.99 per month per family, with a 1 month free trial.

You can get Apple TV+ for free for a year if you buy Apple devices. Apple TV Plus launches November 1st in over 100 countries, for another $4.99 per month for a family subscription.

The company is replacing its sixth-generation iPad model with a new 10.2-inch seventh-generation model optimized for the new iPad OS. It’s got improved brightness, a better viewing angle, A10 Fusion chip and adds Smart Connector plus a new smart keyboard cover.

The focus of iPhone 11 is mostly cameras. Yes, that’s a pun.

The iPhone 11 Pro is “the most advanced and detailed iPhone we’ve made yet.” pic.twitter.com/FdBcZbpUui

Previous Jerry Falwell: I Called The FBI On Liberty U Traitors
Next TEXAS: Bernie, Biden, Warren Lead Trump In Matchup