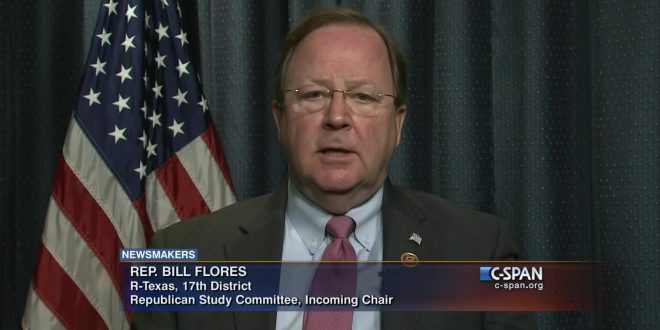 Rep. Bill Flores announced Wednesday morning that he will not seek reelection to the U.S. House next year, becoming the fifth Republican congressman from Texas to voluntarily retire ahead of the 2020 elections.

Flores, from Bryan, has served five terms, coming in with the tea party wave of 2010, the first midterm elections of the Obama presidency.

He rose to chairman of the Republican Study Committee – a huge bloc of conservatives whose influence within the GOP conference was enormous, until the more strident and hardline House Freedom Caucus splintered off and eclipsed it.

Flores last appeared on JMG in April 2015 when he told Tony Perkins that the legalization of same-sex marriage will lead to more riots “like Baltimore.”

GOP not seeking re-election in 2020. pic.twitter.com/tNg1JRkjzS