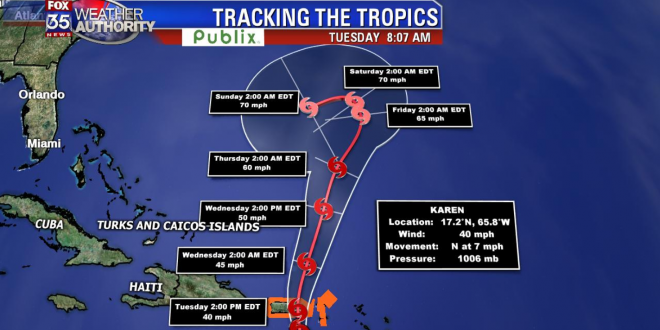 A 6.0-magnitude earthquake struck near Puerto Rico late Monday, scaring and rousing many from their sleep in the U.S. territory. The U.S. Geological Survey said the quake hit 49 miles off the island’s northwest coast at a shallow depth of 6 miles.

Three aftershocks, with magnitudes of 4.7, 4.6 and another of 4.6, hit within less than an hour in the same region at the same depth. Kiara Hernández, spokeswoman for the island’s Emergency Management Agency, told The Associated Press that there were no immediate reports of damage and that there was no risk of tsunami.

Tropical storm Karen is moving north near seven mph with maximum sustained winds at 40 mph with higher gusts. It is about 75 miles west-southwest of St. Croix and about 85 miles south of San Juan, Puerto Rico, according to the hurricane center’s 8 a.m. Tuesday advisory. Additional strengthening is expected in the next 48 hours.

The Virgin Islands, Culebra and Vieques are seeing heavy rains, as of Tuesday morning, with Karen’s center forecast to pass near or over Puerto Rico and the Virgin Islands Tuesday and then move over the western Atlantic Tuesday night and Wednesday.

Besides heavy rainfall and gusty winds across Puerto Rico and the Virgin Islands later Tuesday, there is also a risk for flash flooding and mudslides, especially in mountainous areas, according to the National Hurricane Center’s early morning advisory.