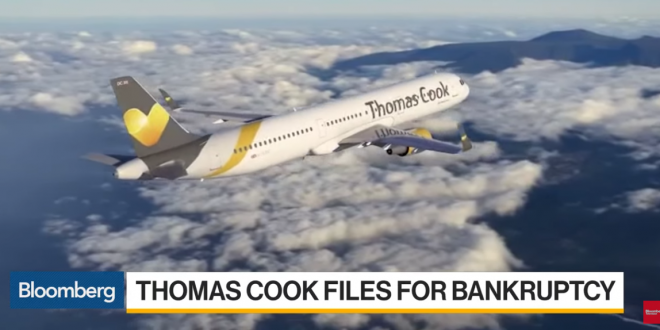 British tour operator Thomas Cook collapsed Sunday night, stranding hundreds of thousands of travelers and putting 21,000 jobs at risk. The 178-year-old company said in a statement that its board “concluded that it had no choice but to take steps to enter into compulsory liquidation with immediate effect” after talks on a financial rescue failed. All Thomas Cook bookings have been canceled, the UK Civil Aviation Authority tweeted.

Peter Fankhauser, Thomas Cook’s chief executive, apologized to customers, employees, suppliers and partners. “This marks a deeply sad day for the company which pioneered package holidays and made travel possible for millions of people around the world,” Fankhauser said. The move triggers the largest ever peacetime repatriation in the history of the United Kingdom, topping the operation the government carried out after the 2017 collapse of Monarch Airlines.

Over in Greece where 50,000 Thomas Cook clients are stranded, the first flights are en route to repatriate passengers holidaying on the islands of Zakynthos, Corfu and Kos.

The country’s tourism minister Haris Theoharis, who has set up an operational centre to coordinate repatriation efforts, says he expects 22,000 passengers to be returned home over the next three days. The ministry is working closely with the British embassy in Athens with the repatriations thought to be overseen by Britain’s Civil Aviation Authority.

Attempting to allay fears in a country whose economy is almost entirely dependent on tourism, the minister said hotel costs and other relevant expenses had been covered for Thomas Cook clients.

We are sorry to announce that Thomas Cook has ceased trading with immediate effect.

BREAKING: “We have not been able to secure a deal to save our business” – Chief executive of Thomas Cook Group, Peter Fankhauser apologises to the company’s ‘heartbroken’ staff and customers.

Get the latest on the #ThomasCook collapse here: https://t.co/ZV1DhQ8LZJ pic.twitter.com/VlaT4Uoejf

The world’s oldest travel firm, #ThomasCook has collapsed!
More than half a million holidaymakers were stranded around the globe on Monday following the #ThomasCookcollapse https://t.co/3gPmpBMriS