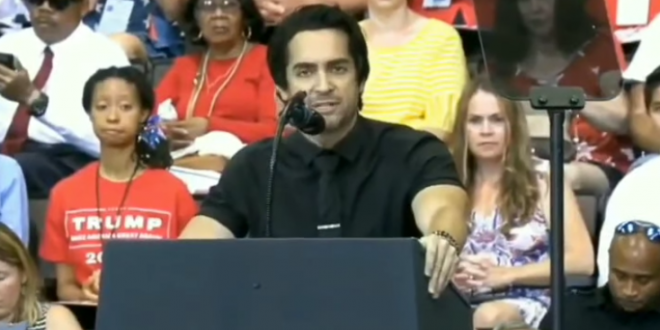 Before President Trump came to the stage at his rally in Cincinnati on Thursday, several other speakers warmed up the crowd. One was Brandon Straka, founder of the “Walk Away” movement. Straka was a liberal, until, as he told the crowd, he learned that the media falsely reported that Trump had mocked a disabled reporter during the 2016 campaign. (Trump did do that.)

To the casual observer, that last line may seem fairly anodyne, a clunky but earnest way of capturing the sentiment behind “e pluribus unum.” But it is not anodyne. It is, in fact, the main rallying cry of QAnon conspiracy theorists.

Hit the link for more about the increasingly large QAnon presence at Trump’s rallies. Just yesterday the FBI labeled QAnon as a “domestic terrorism threat.”

Brandon Straka last appeared on JMG in June when he sued the New York City LGBT Community Center for $20 million for canceling his event.

Lots of Q shirts here at the rally in Cincinnati and Trump pre-rally speaker Brandon Straka just said “Where we go one, we go all.” — a common rallying cry of the #QAnon movement. They even have an acronym for it. #WWG1GWA. pic.twitter.com/cOsAB3vLmC

Last night I had the honor of opening the Trump Rally in Ohio. My speech was hopeful: uniting 🇺🇸& waking up minorities from victimhood groupthink. Hours later I read that I came out as a Q supporter. No such thing happened. @RawStory will you retract this?https://t.co/nThceO4jyP

“A few hours after the FBI assessment leaked, the President held a campaign rally in Cincinnati, where the pre-rally speaker Brandon Straka called out the phrase, ‘Where we go one, we go all,’ a rallying cry of QAnon believers.”https://t.co/E5LkkLAZfQ via @just_security

Previous Michelle Obama: “Zero Chance” I Run For President
Next Christian Prophet: God Will Smite You For Mocking Me