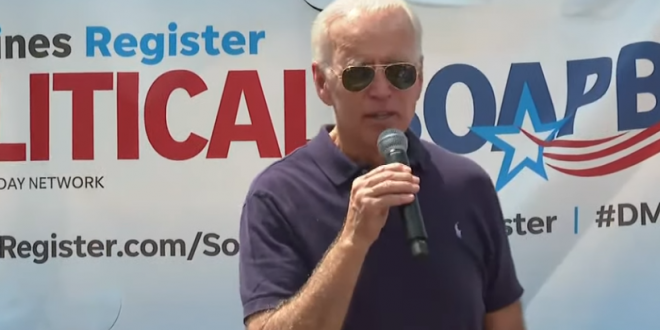 Speaking in Iowa on Thursday night, former Vice President Joe Biden said “poor kids” are “just as talented as white kids,” before correcting himself. Biden was addressing the Iowa Asian and Latino Coalition, which has been meeting with Democratic presidential candidates as it prepares to make an endorsement next week.

“We have this notion that somehow if you’re poor you cannot do it. Poor kids are just as bright and just as talented as white kids,” Biden said, before adding: “Wealthy kids. Black kids. Asian kids. No, I really mean it. But think how we think about it.”

The flub is getting big play on right wing sites.

Joe Biden: “Poor kids are just as bright and just as talented as white kids.” pic.twitter.com/YhDSMnoRce

Joe Biden’s campaign says he misspoke when he said “poor kids” are just as bright as “white kids” https://t.co/cEqyIbB1Xk pic.twitter.com/VfXRpr2MTx

When will Democrats reject this blatant racism? When will the media?

Previous Trump: I Got Another “Beautiful” Love Letter From Kim
Next Trump: Biden Isn’t “Playing With A Full Deck” [VIDEO]