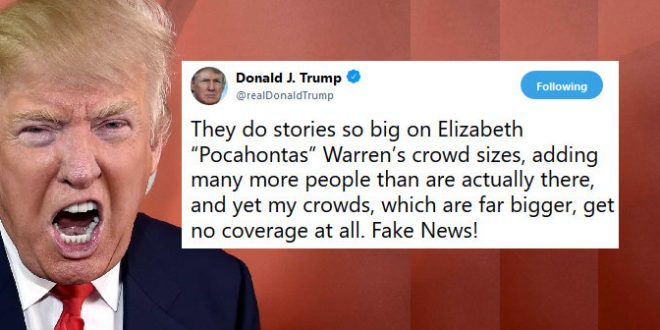 Every accusation is a confession, part 87.

President Trump on Tuesday complained about press coverage of the crowds at Sen. Elizabeth Warren’s (D-Mass.) campaign events, bemoaning that his own rallies don’t get the same treatment. Warren, who has steadily risen in polls of the Democratic presidential race in recent months, has attracted impressive crowds at some of her latest campaign events.

Her team said roughly 15,000 people attended her rally in Seattle on Sunday night, and her campaign said she drew 12,000 people at a St. Paul, Minn., event the week before.

Trump, who regularly fixates on crowd size, has swiped at several candidates in the Democratic race when they have garnered increased attention, including Warren, Sen. Bernie Sanders (I-Vt.) and former Vice President Joe Biden, among others.

They do stories so big on Elizabeth “Pocahontas” Warren’s crowd sizes, adding many more people than are actually there, and yet my crowds, which are far bigger, get no coverage at all. Fake News!