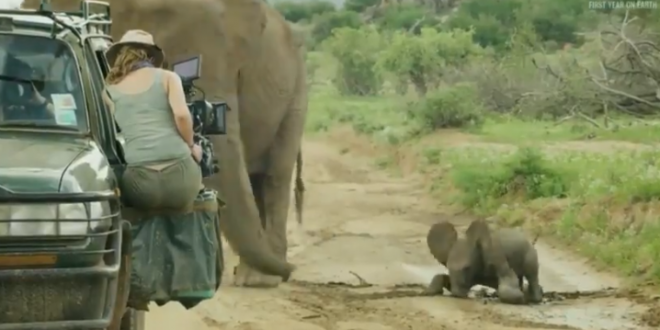 The Trump administration’s decision to loosen restrictions around the import of elephant trophies from Zimbabwe and Zambia has turned attention back to the president’s family’s own connection to the controversial sport.

Donald Trump Jr and Eric Trump are prolific big-game hunters and during the 2016 campaign, images re-emerged of the pair on a 2011 hunting trip posing with animals they had killed on safari, including an elephant, a buffalo and a leopard.

The images of Trump’s sons smiling with dead animals sparked a wave of criticism, with actress Mia Farrow writing on Twitter: “What went so wrong with Trump sons that they could kill this beautiful creature.”

Which brings us to this morning:

President Trump retweeted a video of a baby elephant getting stuck in a patch of mud on Thursday. Trump retweeted the video from a Twitter user named “Tom” with the handle @summervilleguy. The user shared the video and tagged former Fox News host Greta Van Susteren.

The seemingly random re-tweet stood out on a busy morning on Twitter for the president, who is set to host a rally in New Hampshire on Thursday night. Other than the elephant tweet, Trump’s messages were more typical in focusing on race and divisive political topics. He also mostly re-tweeted messages from conservative allies.

A reminder that the Trump admin is allowing hunters to import elephant trophies, despite Trump calling such trophy hunting a “horror show” & pledging not to allow imports. https://t.co/FGlAba71Au pic.twitter.com/SDLCbSEyTs

Just a retweet from Donald Trump of an endangered elephant that’s super cute, and a picture of his son holding a tail cut off the elephant he murdered. pic.twitter.com/sHTjpJ8oRV