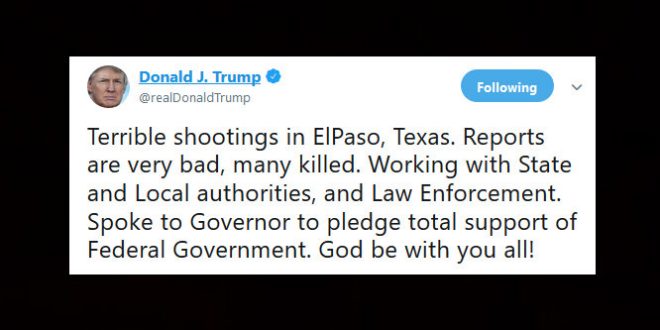 A lone gunman killed more than a dozen people inside a Walmart on Saturday morning, according to eyewitnesses and officials. Police said one person is in custody and they have ruled out multiple shooters.

A woman named Karina, who declined to give her last name, said she was driving in the parking lot with her 7-year-old daughter when she saw a white man in his twenties in front of the store’s main entrance, dressed in all black and carrying a long rifle. Karina said she heard what sounded like “balloons popping” and saw the gunman shoot another man at “point-blank” range.

Terrible shootings in ElPaso, Texas. Reports are very bad, many killed. Working with State and Local authorities, and Law Enforcement. Spoke to Governor to pledge total support of Federal Government. God be with you all!

As many as 20 are dead. 21-year-old man is in custody. We cannot lose our capacity to be shocked and care about this issue. Demand more from our politicians.https://t.co/lTB8ATeeYf