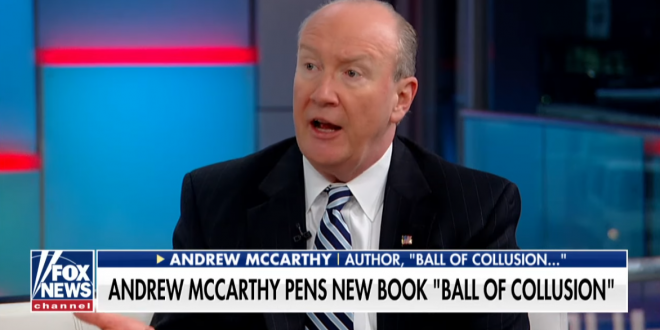 The former U.S. attorney and Fox News contributor appeared on Fox & Friends to promote his new book Ball of Collusion and claimed that the Obama administration “put the law enforcement and intelligence apparatus of our government in the service of the Clinton campaign.”

When pressed if he saw collusion “between Obama and Clinton,” McCarthy affirmed his opinion that “the use of these counterintelligence powers and law enforcement processes in our political process which is never supposed to happen.”

Go out and get Andrew McCarthy’s new book, “Ball of Collusion.” “Supervision became the investigator, and when they pushed the envelope, there was nobody there to tell them NO. It goes right to the President (Obama). Plenty of information that Obama was informed & knew exactly…

….what they were doing. There’s plenty of indication, we don’t have to speculate.” @SteveDoocy “Holy cow, got to read this book.” @ainsleyearhardt “WOW!” @foxandfriends A very serious situation. Can never be allowed to happen again! DRAIN THE SWAMP

Andrew McCarthy Accuses Obama of Colluding With Law Enforcement to Get Clinton Electedhttps://t.co/JY6kZmvYem