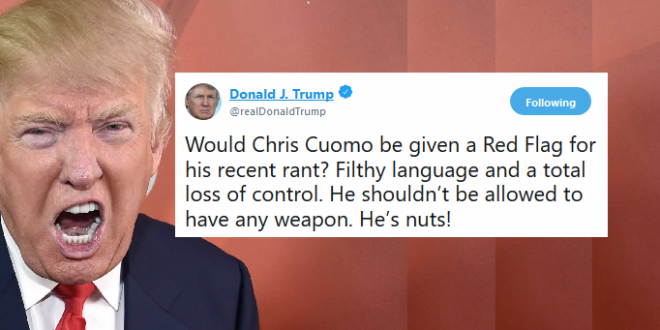 Never missing an opportunity to taunt a CNN employee, President Donald Trump joined his son Donald Trump Jr. in mocking anchor Chris Cuomo after a video of Cuomo arguing with an unidentified man was posted by a conservative media personality.

After sending a more presidential tweet about Chinese currency devaluation, the media-critic-in-chief decided to double-down on the story, suggesting that Cuomo’s behavior could trigger concerns about gun violence.

The president has insulted Cuomo several times this year on Twitter, generally poking fun at his ratings, which trail competitors Rachel Maddow and Sean Hannity.

Would Chris Cuomo be given a Red Flag for his recent rant? Filthy language and a total loss of control. He shouldn’t be allowed to have any weapon. He’s nuts!

Previous Shouting Heard From Epstein’s Cell When Body Found
Next Christian Prophet: The Lord Showed Me A Vision That The White House Was Bugged By The FBI And The CIA