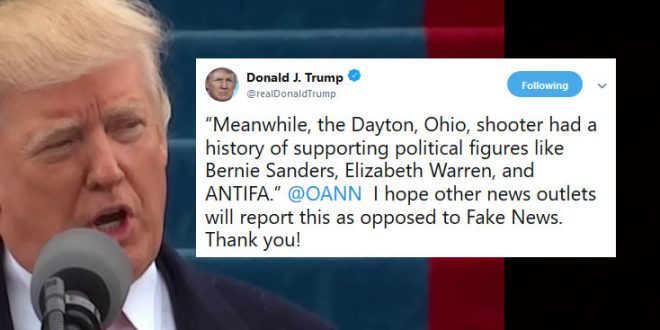 As Trump bashed the New York Times during a new Twitter diatribe about “fake news,” he eventually moved to highlight the news that the Dayton killer’s social media profile shows he supported liberal politicians and organizations like Antifa.

It’s worth noting, however, that unlike the El Paso shooting — where a racist and political motive was made clear thanks to a manifesto apparently left behind by the shooter — investigators have yet to determine the Dayton shooter’s motives, political or otherwise.

“Meanwhile, the Dayton, Ohio, shooter had a history of supporting political figures like Bernie Sanders, Elizabeth Warren, and ANTIFA.” @OANN I hope other news outlets will report this as opposed to Fake News. Thank you!