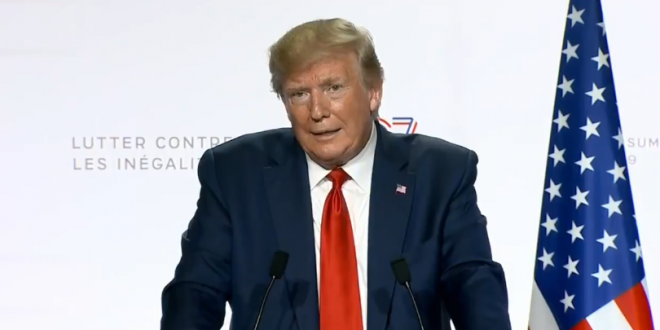 Trump: It’s Costing Me $3 To $5 Billion To Be President

During a news conference at the G7 in France Monday, Trump was confronted by NBC’s Hallie Jackson about the president’s desire to host next year’s summit at his Doral resort in south Florida.

“You dropped several hints about Doral, and hosting next year’s G7 at your property,” Jackson said. “What reassurances, if any, can you give the American people that you are not looking to profit off the presidency?” Trump, in response, claims he’s lost billions off of the presidency.

“I’ve spent — and I think, in a combination of loss, and opportunity — probably it will cost me anywhere from $3 to $5 billion to be president,” Trump said. “And the only thing I care about is this country. Couldn’t care less [about money], otherwise, I wouldn’t have [run for president].”

Trump went on to deliver an infomercial for Doral, describing its “very luxurious rooms with magnificent views.”

Trump strongly pushed the idea of holding next year’s G7 summit at his Doral resort in Miami, as he used the world stage to deliver an infomercial for his property twice in one day https://t.co/4m0M7qigAy pic.twitter.com/ReUaLN8fFC

President Trump says he’s losing 3 to 5 billion dollars being the President. @realDonaldTrump adds he wants the next G7 Summit to be held at his National Doral resort. Trump also says he’s losing money by not making speeches #G7Summit #G7 pic.twitter.com/HBsR6GQHb9