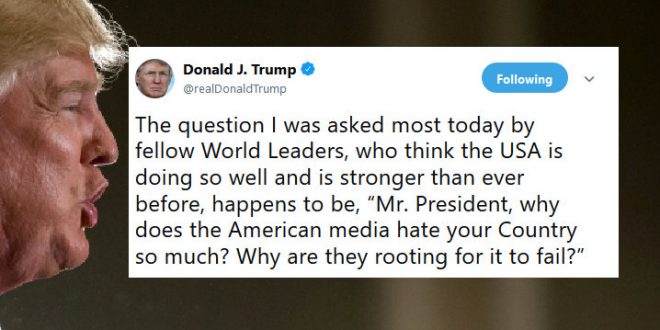 President Trump said other world leaders are asking with why the American media is “rooting” for the country “to fail” Sunday, following reports that he was blindsided by the French​ inviting a top Iranian official​ to the G-7 summit.

On Sunday, Trump appeared to say he was having “second thoughts” about his ongoing trade war with China — before his press secretary, Stephanie Grisham, and other top administration officials said he was “misinterpreted.”

The question I was asked most today by fellow World Leaders, who think the USA is doing so well and is stronger than ever before, happens to be, “Mr. President, why does the American media hate your Country so much? Why are they rooting for it to fail?”

Lol. Nobody asked you that.

And a world leader calling you “Mr. President?” Your lies are laughable bedtime stories you have your staff read you at night.

The world is laughing at you, and you’re the only one who doesn’t know why. Sad! #G7Summit pic.twitter.com/3cf4L5kjuR

BULLSHIT. You’re a pathetic pathological liar. No one asked you this. In fact, I suspect behind your back they talked about you being such an ignorant, incompetent buffoon who isn’t worthy of being in the same room with them. #Trump #G7Summit