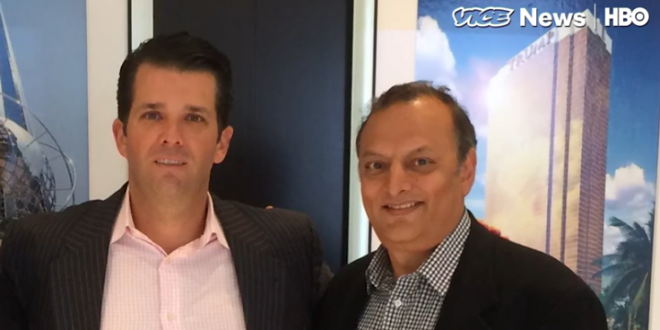 A former business partner of President Trump’s company was arrested last week on felony charges of stealing two pieces of luggage from the Memphis airport. Dinesh Chawla and his brother were partners with the Trump Organization on multiple hotel projects in the Mississippi Delta until earlier this year.

Last year, The New York Times profiled Mr. Chawla, whose father, V. K. Chawla grew up in a refugee camp in Punjab, India, and started the family’s hotel business about three decades ago after seeking the advice of Mr. Trump, then a New York real estate developer.

According to police records, airport security footage recorded Dinesh Chawla on Aug. 18 removing another passenger’s suitcase from a baggage claim carousel and putting it in his car before taking a flight.

Chawla was arrested Thursday after flying back to Memphis from Orlando, Florida. The police statement says Chawla confessed to stealing the two bags in question “as well as other thefts in the past.” The value of the suitcase and its contents taken Aug. 18 is reported at $2,599, while the bag and contents taken in July is valued at $1,300. Chawla is free on $5,000 bail and didn’t immediately respond to an email seeking comment late Monday.

Chawla is the CEO of Chawla Hotels, a family company that owns 17 hotels in Mississippi. The Trump family gave up on the two new hotel franchises that Chawla intended to license in February, with Eric Trump blaming politics. A high-end hotel that Chawla is building in Cleveland and intended to franchise under a proposed Trump brand remains under construction.

The luxury hotel was to be the first in the Trump Scion chain, and three of the Chawlas’ 18 lodgings were to be converted into a new Trump chain called American Idea.

Of the Scion, now called the Lyric, the Trumps were to handle branding and management. The Chawlas invested the capital and qualified for a $6 million tax rebate upon completion and approval of the project.

The Times quoted Eric Trump in February, referring to “harassment” from Democrats, and saying: “We already have the greatest properties in the world and if we have to slow down our growth for the time being, we are happy to do it.

Dinesh Chawla, a former hotel partner of the Trumps, told the Memphis airport police “that he knows stealing luggage is wrong, but he does it for the thrill and excitement.” @steveeder @nytimes https://t.co/kOH7AMSRk8

Dinesh Chawla and his family own 17 hotels, but police say he’s admitted to stealing luggage at the Memphis airport. https://t.co/5AaxU013w8

Previous Fox Hosts: Trump Resort Is “Perfect Site” For Next G7
Next Video From Outside Epstein’s Cell Found Unusable