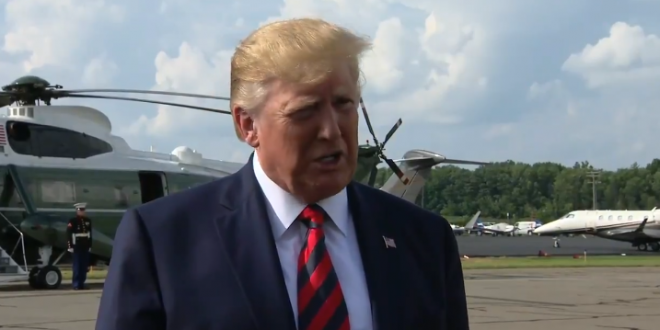 “Greenland, it got released somehow. It’s something we talked about. Denmark essentially owns it. We’re very good allies with Denmark. We protect Denmark like we protect large portions of the world. So the concept came up, and I said, certainly, strategically it’s interesting and we’d be interested, but we’ll talk to them a little bit.

“It’s not number one on the burner. Essentially it’s a large real estate deal. A lot of things could be done. It’s hurting Denmark because they’re losing almost $700 million a year carrying it. So they carry it at a great loss. And strategically, for the United States it would be nice.

“And we’re a big ally of Denmark, and we help Denmark and protect Denmark.  I’m thinking about going there. I’m not necessarily definitely going there, but I may be going. We’re going to Poland and then we may be going to Denmark. Not for this reason at all. But we’re looking at it.” – Donald Trump, last night.

Previous Trump Claims NY Times Will Endorse Him For 2020
Next Danish PM: Selling Greenland Is An Absurd Discussion