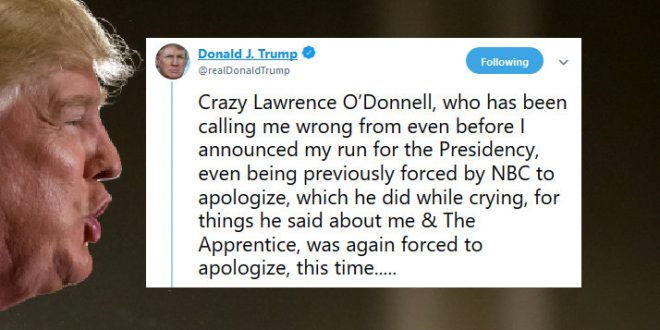 Never one to sit out a cable news controversy, President Donald Trump launched a three-tweet attack on Lawrence O’Donnell on Thursday morning, even as the MSNBC host already apologized for a thinly sourced report on his financial activities.

O’Donnell already “retracted” a Tuesday night report, when he said that “Russian oligarchs” co-signed a loan taken by the president. “We don’t know whether the information is inaccurate,” O’Donnell said on Wednesday. “But the fact is, we do know it wasn’t ready for broadcast. And for that, I apologize.”

Crazy Lawrence O’Donnell, who has been calling me wrong from even before I announced my run for the Presidency, even being previously forced by NBC to apologize, which he did while crying, for things he said about me & The Apprentice, was again forced to apologize, this time…..

….for the most ridiculous claim of all, that Russia, Russia, Russia, or Russian oligarchs, co-signed loan documents for me, a guarantee. Totally false, as is virtually everything else he, and much of the rest of the LameStream Media, has said about me for years. ALL APOLOGIZE!

The totally inaccurate reporting by Lawrence O’Donnell, for which he has been forced by NBC to apologize, is NO DIFFERENT than the horrible, corrupt and fraudulent Fake News that I (and many millions of GREAT supporters) have had to put up with for years. So bad for the USA!