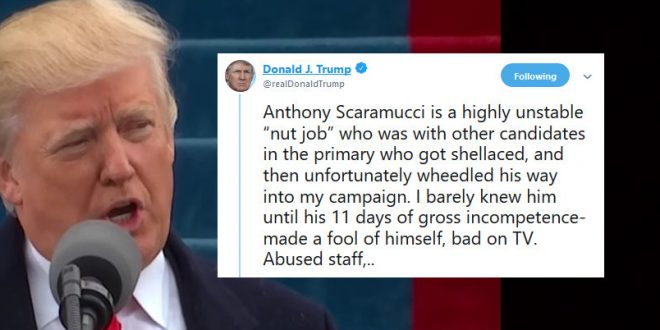 Trump Explodes At “Highly Unstable Nut Job” Mooch, Who Is A Mental Wreck And Probably Getting Divorced

President Donald Trump exploded with rage on Monday after former White House Communications Director Anthony Scaramucci once again hammered him during a CNN segment in which he said he wanted to gather together former Trump cabinet officials to denounce the president.

Scaramucci recently turned on the president after he made racist comments about four Democratic lawmakers by telling them to “go back” to their countries of origin despite the fact that all of them are American citizens.

Earlier on Monday morning in conversation with CNN’s Alisyn Camerota, Scaramucci revealed ongoing conversations with former members of the Trump cabinet about revealing their concern for the president’s mental health.

“This is not a never-Trump situation, this is not just screeching rhetoric. This is, okay, the guy’s unstable, everyone inside knows it. Everyone outside knows it. Let’s see if we can find a viable alternative. Moreover, I’ve got to get these former cabinet officials in unity to speak up about it. They know it’s a crisis,” before comparing the situation to The Caine Mutiny.

Anthony Scaramucci is a highly unstable “nut job” who was with other candidates in the primary who got shellaced, and then unfortunately wheedled his way into my campaign. I barely knew him until his 11 days of gross incompetence-made a fool of himself, bad on TV. Abused staff,..

….got fired. Wrote a very nice book about me just recently. Now the book is a lie? Said his wife was driving him crazy, “something big” was happening with her. Getting divorced. He was a mental wreck. We didn’t want him around. Now Fake News puts him on like he was my buddy!

“You have to break for your children,” says former Trump White House communications director Anthony @Scaramucci, about why Republicans need to break away from President Trump. “I have five children. You can’t have the social fabric of the United States disintegrate over one man” pic.twitter.com/tKsrfG6ORy

Previous Prince Andrew Denies “Abhorrent” Epstein Reports
Next Extremists Claim Point Of Portland Rally Was To “Waste Millions In Police Resources,” Will Do It Again [VIDEO]