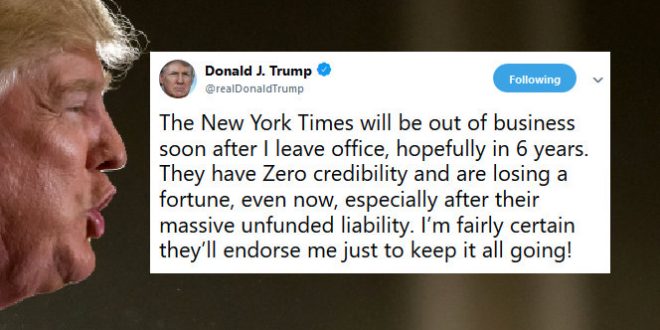 Trump Claims NY Times Will Endorse Him For 2020

President Donald Trump was hit with a fact-check on Sunday after declaring that The New York Times was “losing a fortune” and would soon be “out of business.” Trump tweeted that the Times ― his hometown’s paper of record and one of his favorite media targets ― had “zero credibility” and would fold “soon after I leave office.”

Minutes later, Peter Baker, the chief White House correspondent for the Times, tweeted a fact check. Earlier this month, the Times reported a 5.2% increase in total revenue to $436.3 million in the second quarter of 2019 compared to the same period in 2018.

The company also reported a $37.9 million operating profit in Q2 of this year ― a dip from the same period the year before, which the company attributed to investment in growing their subscription business.

The New York Times will be out of business soon after I leave office, hopefully in 6 years. They have Zero credibility and are losing a fortune, even now, especially after their massive unfunded liability. I’m fairly certain they’ll endorse me just to keep it all going!

Fact check: Revenues up, subscriptions at a record high, profits at $37.9 million in the second quarter. https://t.co/ZqWCIsu4Zu