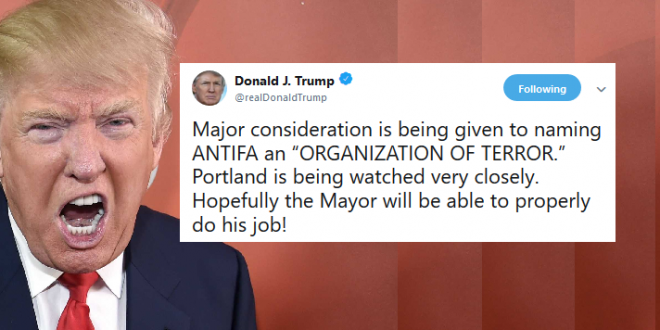 Trump Calls Out Antifa As Terrorists As Pro-Trump White Supremacists Assemble For Rally In Portland, Oregon

The serenity of downtown Portland will be tested yet again on Saturday afternoon. Stores began closing Friday night ahead of dueling protests between groups of right-wing extremists and anti-fascist demonstrators.

Several extremist groups are expected to show up, but no one has applied for any type of permit. Police learned about the protest from monitoring social media, and from what they read, there is concern for possible violence.

The far-right event Saturday was organized by the “Proud Boys,” a group the Southern Poverty Law Center designated as a hate group. Police aren’t sure which protest groups will show up, what they’ll be protesting about and if they’re only coming to cause trouble.

Mayor Ted Wheeler and Chief Danielle Outlaw have vowed to use the full force of the law against anyone committing acts of violence or vandalism and ordered that none of the nearly 1,000 sworn police officers would have the day off.

More than two dozen other agencies, including the Oregon State Police and the FBI, will help local authorities.

The city’s concern was that a far-right rally dubbed “End Domestic Terrorism” could turn into a slugfest after a militant, far-left antifa, or anti-fascist, group vowed to confront the rallygoers they described as “invaders.”

Major consideration is being given to naming ANTIFA an “ORGANIZATION OF TERROR.” Portland is being watched very closely. Hopefully the Mayor will be able to properly do his job!