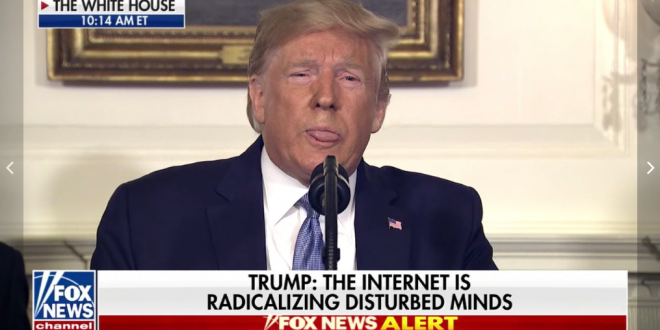 Trump Blames Shootings On Video Games And Internet, Makes No Mention of Guns, Gets Name Of City Wrong

President Donald Trump on Monday spoke in response to the mass shootings in El Paso, Texas, and Dayton, Ohio, over the weekend, calling them a “crime against all of humanity.”

The president blamed white supremacy, the internet, video games and mental illness for the massacres. He did not blame guns or himself. Trump called the attacks “evil” and “barbaric” and denounced the shooters as wicked. “We vow to act with urgent resolve,” he said, without specifying any action.

Trump mentioned the alleged El Paso’s shooter’s reported manifesto, which the president said was “consumed by racist hate.” He then called on the nation to condemn racism and white supremacy, while not acknowledging his role in promoting those ideas.

Trump, struggling with a bad case of what appears to be dry mouth, falsely claimed the Ohio mass shooting took place in Toledo. (It happened in Dayton.) pic.twitter.com/dzOcsIV5ox

It was Dayton, not Toledo, Trump.

Trump said, “may God bless the memory of those who perished in Toledo,” but the shooting happened in Dayton, Ohio.