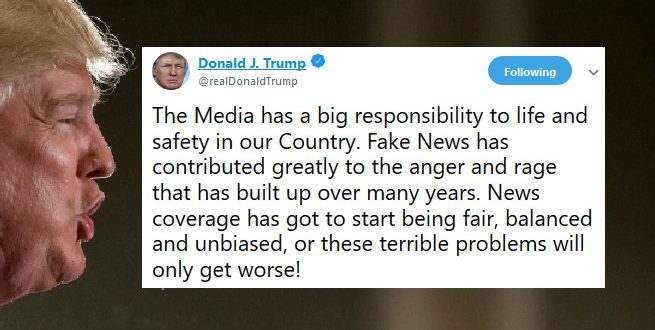 President Trump on Monday said “fake news” has contributed to growing “anger and rage” in the country in the wake of two mass shootings over the weekend, marking the second time he has criticized media coverage in the aftermath of a tragedy.

The president’s suggestion that press coverage is to blame came after shootings in El Paso, Texas and Dayton, Ohio that took place within 24 hours of each other over the weekend.

A gunman killed 20 people and wounded dozens more in an attack at a Walmart in El Paso on Saturday. He allegedly wrote a racist, anti-immigrant manifesto before the attack, which described fears of a Latino “invasion” and references “fake news.”

The Media has a big responsibility to life and safety in our Country. Fake News has contributed greatly to the anger and rage that has built up over many years. News coverage has got to start being fair, balanced and unbiased, or these terrible problems will only get worse!

Trump Blames Mass Shootings on the Media: 'Fake News Has Contributed Greatly to the Anger and Rage' https://t.co/frz5yYpCTo