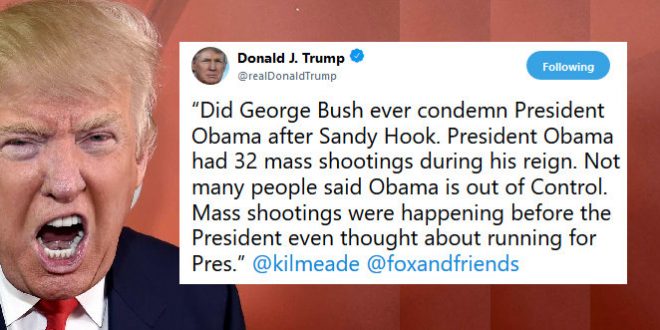 President Donald Trump is addressing recent comments made by President Barack Obama via his favorite television show as a proxy: Fox & Friends. White House televisions were clearly tuned into Fox News on Tuesday morning, as Trump retweeted comments made by Fox News hosts Brian Kilmeade and Ainsley Earhardt that defended the sitting president amidst political rancor that has come from the weekend mass shootings that have, thus far, left 31 individuals dead.

After posting the below messages, Trump retweeted a June 6th post by Mitch McConnell which observes the 75th anniversary of D-Day. Because reasons.

“It’s political season and the election is around the corner. They want to continue to push that racist narrative.” @ainsleyearhardt @foxandfriends And I am the least racist person. Black, Hispanic and Asian Unemployment is the lowest (BEST) in the history of the United States!

Previous Carlson: Blaming Trump For Shootings Is A “Joke”
Next Hannity Calls For Armed Guards “On Every Floor Of Every School, Inside Every Hall Of Every Mall” [VIDEO]