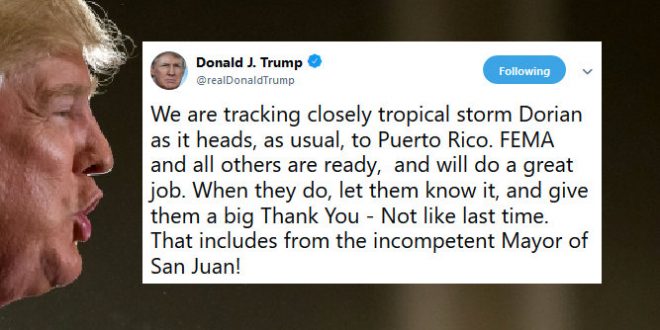 President Trump on Wednesday criticized the mayor of San Juan, Puerto Rico, as the island braced for a tropical storm nearly two years after it was devastated by Hurricane Maria.

San Juan Mayor Carmen Yulín Cruz, a vocal critic of the president and the administration’s response to Hurricane Maria, said Tuesday night that Trump should “get out of the way” and let others do the job of preparing for Dorian.

She added that she felt the island was better prepared ahead of the coming storm than it was before Maria devastated the U.S. territory in 2017.

We are tracking closely tropical storm Dorian as it heads, as usual, to Puerto Rico. FEMA and all others are ready, and will do a great job. When they do, let them know it, and give them a big Thank You – Not like last time. That includes from the incompetent Mayor of San Juan!