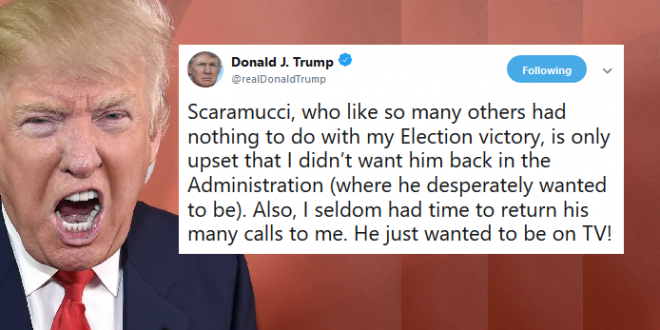 Trump And The Mooch Continue To Trade Shots

After Trump attacked Scaramucci as having “nothing to do with my election victory” and claiming he “just wanted to be on TV,” Scaramucci tweeted at Trump, “you’re losing your fastball,’ and added, “Time to call in a good relief pitcher. @potus is lost.”

The online brawl between the two began when Scaramucci, who famously served just 11 days in the summer of 2017 before being fired, criticized the president’s response to mass shootings in El Paso, Texas and Dayton, Ohio in a Thursday appearance on MSNBC’s “Hardball” with Chris Matthews.

Scaramucci, who like so many others had nothing to do with my Election victory, is only upset that I didn’t want him back in the Administration (where he desperately wanted to be). Also, I seldom had time to return his many calls to me. He just wanted to be on TV!

You are losing your fastball— very weak troll. Bullying is the most anti-American thing in our culture and it is emanating from the Oval Office. Many have called and are willing to work on a necessary replacement. Time to call in a good relief pitcher. @potus is lost. https://t.co/7fiFHbd7O6