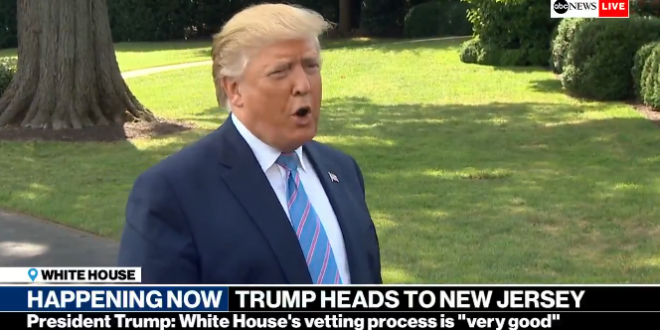 Trump After Intel Pick Disaster: I Have A Great Vetting Process, The Media Does It For Me And We Save Money

Slapping together a nomination while watching television, without doing basic vetting beforehand, only to have the nomination collapse in humiliation — the process that occurred for Andrew Puzder, Stephen Moore, Herman Cain, Ronny Jackson, and many others — is most people’s idea of a bad process. It has happened to Trump repeatedly. President Trump defended it to reporters as a wise money-saving trick. Let the Fake News media do your vetting for you!

“You vet for me,” Pres. Trump tells the press. “I think the White House has a great vetting process. You vet for me…We save a lot of money that way.” https://t.co/vPc2gbi9ym pic.twitter.com/v6wnaOKS21

Previous POLAND: Archbishop Condemns “The Rainbow Plague”
Next Trump Could Save Millions From Fed Cut He Pushed