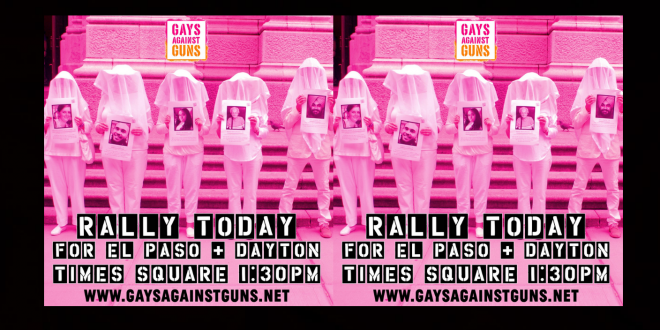 Who: Gays Against Guns is an inclusive direct action group of LGBTQ+ people and their allies committed to nonviolently breaking the gun industry’s chain of death —investors, manufacturers, the NRA, and politicians who block safer gun laws.

Speakers will include Maryellen Novak, a member of GAG, Marti Gould Cummings, a legendary drag performer and a founder of Hell’s Kitchen Democrats, and Eric Adams, the Brooklyn Borough President, among others.

“As my friend Gilbert Baker, the creator of the rainbow flag, used to say, ‘When we work together we really can make a difference,’” said Ken Kidd, a founding member of GAG. Cathy Marino-Thomas, another GAG member, said, “We’ve committed to staging a protest in response to EVERY mass shooting with more than ten fatalities. And we will continue to hit the streets, screaming and shouting, until there is real change in this country around the issue of gun violence”.

Previous KENTUCKY: Protesters Taunt McConnell With Chants Of “Moscow Mitch” As He Tries To Address Crowd [VIDEO]
Next Mayor Pete: There’s No Question White Nationalism Is Condoned At The Highest Levels Of Our Government