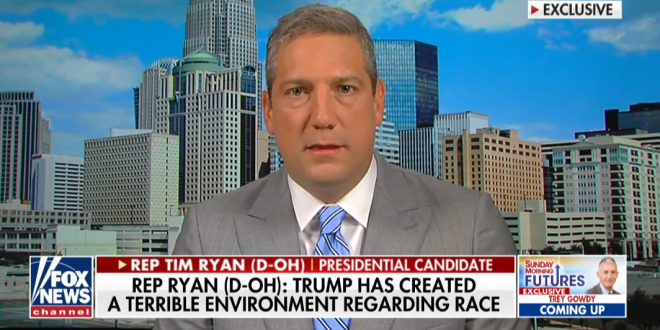 Tim Ryan: The GOP Needs To “Get Their Shit Together” And Stop Pandering To The NRA, People Are Dying

“I’m calling on the president and the Congress to come back in session. Let’s do the work in Washington. Do the background check bill that we passed out of the House. We’ve got to ban these assault weapons. This is ridiculous. Honestly for a guy to drive 10 hours to go kill Mexicans like what happened in El Paso is sickening and I think the environment around anti-immigration, the race issues that are so polarizing today that the president throws gasoline on has got to stop.”

“We’ve got to bring this country together, we’ve got to heal and it’s got to start at the top. The president needs to take a leadership role in this, he’s got to stop being so divisive, he’s got to stop tipping his hat to the white nationalists, and sometimes overtly to them, to where he’s talking to some crazy guy who’s going to drive 10 hours to shoot Mexicans.” – Rep. Tim Ryan, speaking on Fox today. The key quote came minutes later on MSNBC.

Rep. Tim Ryan on gun control legislation: “Republicans need to, quite frankly, get their shit together and stop pandering to the NRA because people are getting killed.” pic.twitter.com/n5Asp6vhME