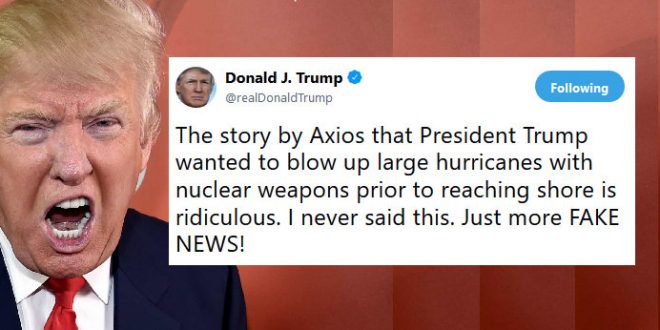 The Chosen One Denies Wanting To Nuke Hurricanes

President Donald Trump on Monday described as “ridiculous” a report that he discussed using nuclear weapons to alter the course of hurricanes.

Trump, who is meeting with world leaders at the G-7 in France, took to Twitter to swipe at an Axios report that he had raised the idea with senior Homeland Security and national security officials of using nuclear weapons to stop hurricanes.

The Axios report, citing unnamed sources, said Trump asked participants at a White House briefing on hurricanes, “Why don’t we nuke them?” The source recalls officials telling the president that they would look into it.

The story by Axios that President Trump wanted to blow up large hurricanes with nuclear weapons prior to reaching shore is ridiculous. I never said this. Just more FAKE NEWS!

This is literally the plot to Sharknado you utter moron.
Didn’t you realise it was fiction?

Hollywood Reporter: Trump reportedly threatened to sue ‘Sharknado 3’ for not casting him as the president. https://t.co/Fha596vx5W

Trump threatened to sue SHARKNADO for giving Mark Cuban the role of president over him. https://t.co/WQPaD19ZON

Previous CHATTER AWAY: Overnight Open Thread
Next Trump Promotes Own Golf Resort For Next G7 Summit