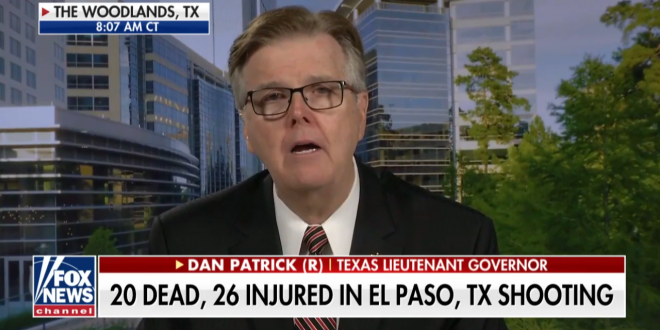 Obviously only Americans have video games.

Texas Lieutenant Governor Dan Patrick (R) embarked on an tirade about video games on Sunday in response to the mass shootings in El Paso and Dayton this weekend.

In an interview with Fox & Friends, Patrick mourned for the dead before pivoting to argue that video games were the root cause of the shootings, even going so far as to call for federal action to be taken against the video game industry.

Here’s part of Texas Lt. Gov Dan Patrick’s appearance on Fox & Friends, where he uses the El Paso shooting to call for federal government intervention in the video game industry, more prayer in schools, and more saluting the flag, among other things. pic.twitter.com/8xqkEyvvH7

Among those who declined the request from @CNNSotu to come on to discuss the mass shootings:@WhiteHouse
Texas Gov @GregAbbott_TX
Texas LG @DanPatrick
Sen @JohnCornyn
Sen @tedcruz, @GovMikeDeWine, @GOPLeader McCarthy@senatemajldr did not respond to our request.

Previous Mayor Pete: There’s No Question White Nationalism Is Condoned At The Highest Levels Of Our Government
Next Dayton Shooter Was Wearing “Deathcore” Band Hoodie