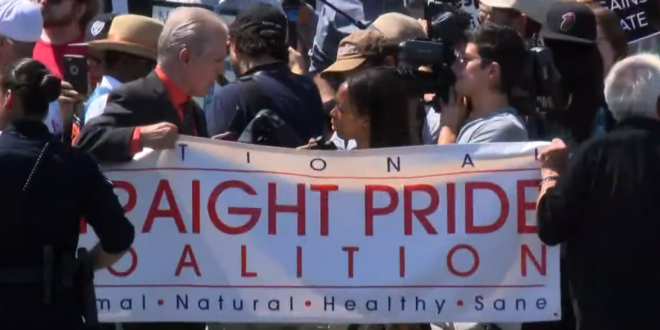 While organizers of the straight pride rally in Modesto had envisioned an event that would draw several hundred people, the rally turned out to be a few dozen people gathered in a barn, which was cut short by the venue’s owner, followed by a protest in front of Planned Parenthood, which was closed. The events staged in opposition of the rally drew far more, including the roughly 250 people who attended a vigil to celebrate Modesto’s diversity and another roughly 250 people who gathered at Enslen Park for a counter protest.

Bay Area chiropractor Don Grundmann who helped bring the rally to Modesto said it does not matter that his side was outnumbered because “that does not change the truth of our message. They talk about diversity and attack us. So-called diversity and tolerance is a one-way street.” According to its website, the coalition is protecting traditional gender roles, Christianity, heterosexuality, Western Civilization, babies, and the contributions of whites to Western Civilization from the malevolence of the homosexual movement.

As you’ll see below, among the haters was right wing radio host Jesse Lee Peterson, who has appeared on JMG many times for his insane claims, including that Brett Kavanaugh isn’t a “real man” because he only has daughters and real men “make sons first.” Hit the first clip at the 1:00 mark for a telling comment on Peterson’s attendance.