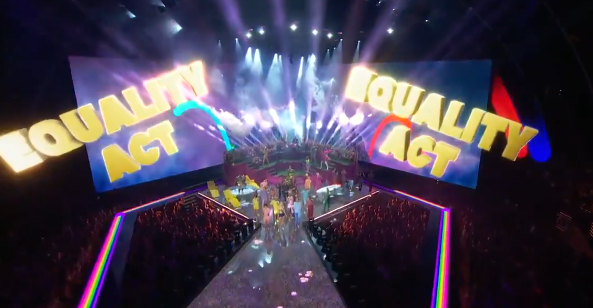 Dancers dressed in colorful ensembles moved around the stage before the drag queens featured in the music video appeared next to Swift as she sang the anti-hate anthem. The first number concluded with the words “Equality Act” largely written behind the performers.

Swift has been an advocate for the Equality Act and has urged her followers to sign a petition in its favor on social media. The House of Representatives passed legislation in May that protects those living in states where it’s legal to discriminate based on sexual orientation and gender identity when it comes to housing, employment and other services.

Taylor Swift got political during her 2019 MTV #VMAs acceptance speech for video of the year to call out the Trump administration’s current lack of acknowledgment of the Equality Act petition for LGBTQ rights.https://t.co/Kd3otERFMG pic.twitter.com/LPSZxFMAEq

Taylor Swift promoted the Equality Act during her appearance tonight at the VMAs.
Via MTV pic.twitter.com/NLY1Kr49vZ