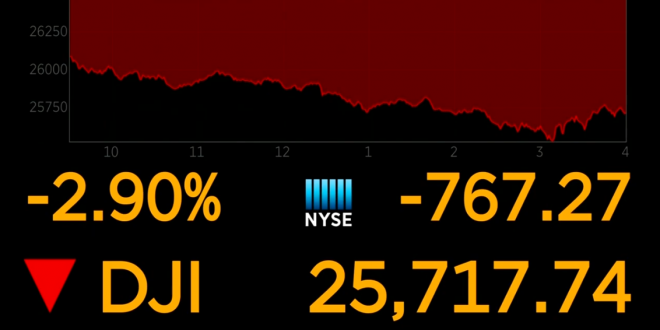 Financial markets buckled after China escalated the trade war with the U.S., sending American stocks to the biggest drop this year and sparking a rally in global bonds. Gold surged with the yen.

The S&P 500 Index plunged about 3% and losses in the Dow Jones Industrial Average surpassed 750 points. Apple and IBM slid at least 4.5% as all but nine companies in the U.S. stock benchmark traded lower. The Cboe Volatility Index surged 33%.

The 10-year Treasury yield was close to completely erasing the jump that followed President Donald Trump’s election. China’s yuan sank beyond 7 per dollar, a move that suggests the level is no longer a line in the sand for policy makers in Beijing. Oil tumbled.

Trump surprised the financial sector Friday by announcing additional tariffs on Chinese goods. Trade talks between the U.S. and China fell apart last week after prior negotiations did the same thing in May.

Both governments have imposed billions of dollars of tariffs on each other’s goods over the past year, resulting in global market and supply chain instability. Reuters reported that Trump wanted to force China’s economy into a downturn, and in turn force them into a trade deal favorable to the U.S.

I believe that’s the sixth largest daily point loss for the #DJIA.