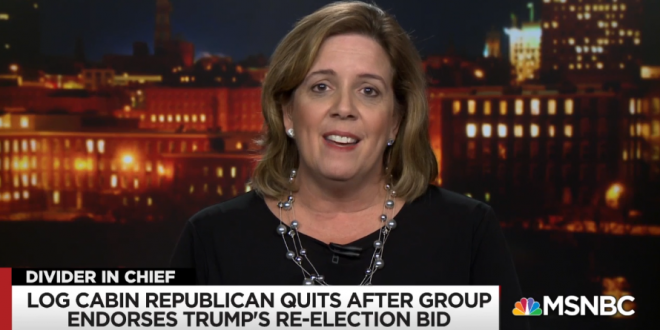 Resigned Log Cabin Official: Trump Will “Divide And Destroy This Country” To Advance His Political Power

Jennifer Horn, the Log Cabin Republican board member who resigned in protest over their endorsement of Trump, spoke out against the president with MSNBC’s Chris Hayes, saying: “He will divide and damage and destroy this country in any manner he thinks he need to advance his own political power.”

Horn, a two-time Republican Congressional candidate from New Hampshire said she could no longer defend Trump’s actions to her daughter, prompting her to step down.

“But it’s not just the LGBTQ community this president targets,” she added. “When we look at immigrants, people — anyone that he thinks he can somehow use to anger his base— he doesn’t care if he has to divide on racial lines, on ethnic lines, on educational lines.”

Video of her MSNBC appearance is here.

Previous Denmark Furious After Trump Abruptly Cancels Visit Over Their Rejection Of Insane Plan To Buy Greenland
Next Log Cabin Spox: I Ask If The LGBT Community Is Better Off Now Under Trump And The Answer Is Yes [VIDEO]