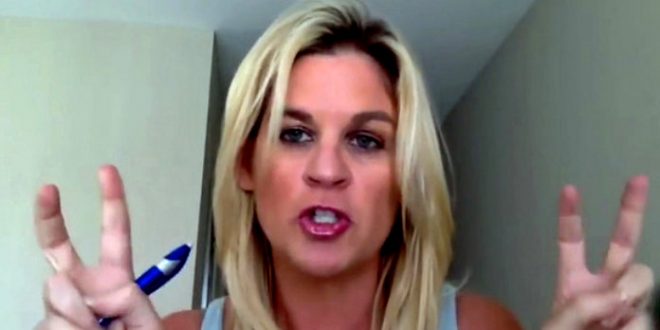 #QAnon Nutbag Liz Crokin: The 2020 WH Race Is Moot Because All Dems Will Be In Prison For Child Sex Crimes

“No one’s gonna beat President Trump, number one. And the media continues to lie about his numbers. He won by a much bigger margin than the media to this day is reporting. So that’s number one.

“Are any of these candidates gonna be left standing by next summer? I truly wouldn’t be surprised if none of them are left standing.” – Leading QAnon nubag Liz “JFK Jr Is Alive” Crokin, speaking today on a Christian podcast.

Liz Crokin is not worried that any of the Democratic candidates will actually beat Trump in 2020 because they are all going to be in prison by next year for treason, crimes against humanity and/or trafficking children. pic.twitter.com/P7EPSJLkab

PREVIOUSLY ON JMG: Liz Crokin predicts that the college admissions scandal will prove that Hollywood celebrities “eat babies.” Crokin claims Trump purposely misspelled “hamburger” to mock Obama and his “Satanist pals.” Crokin claims Hollywood celebrities set California’s wildfires to cover up evidence of their pedophilia. Crokin claims California mudslides were God’s punishment to Oprah for being anti-Trump. Crokin claims that all of Trump’s “loudest critics” are involved in pedophilia and that one-third of all elected officials are “Satanic cannibals” who “drink the blood of children.” Crokin declares that she knows Jesus Christ is real because demons gave her dog bloody diarrhea. Crokin made national headlines in 2018 when she accused model Chrissy Teigen and her husband, pop star John Legend, of being involved in pedophilia.