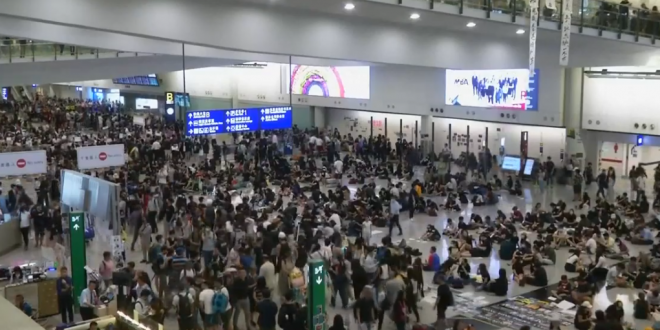 Flight check-in has been suspended at Hong Kong International Airport for a second consecutive day because of anti-government protests. The airport, which is one of the world’s busiest, has been the site of daily protests since Friday.

Videos on social media show passengers struggling to get through demonstrators, who have been sitting inside blocking departures. The city’s leader, Carrie Lam, earlier issued a fresh warning to protesters.

Ms Lam said Hong Kong had “reached [a] dangerous situation” and that violence during protests would push it “down a path of no return”. Mass unrest has rocked Hong Kong for 10 weeks and shows no signs of abating.

Hong Kong’s international airport — one of the busiest in Asia — had emerged as a key protest target before today’s mass gathering, as anti-government demonstrators looked to take their message directly to the international community.

At the airport over the weekend, leaflets in Chinese, English, French, Korean, Japanese and other languages were handed out to arriving international visitors, explaining the causes of the unrest — as protesters see it — and the demands of the opposition movement.

Showcasing the slick design that has characterized the protests, other pamphlets and posters also advertised planned demonstrations as “new tourist spots,” and advised tourists what to do if they were caught in the protests during their visit.

Chinese propaganda outlets warned on Tuesday that protesters in Hong Kong are “asking for self-destruction,” as they released a video showing military vehicles amassing near the border of the city.

Meanwhile, the city’s embattled leader, Carrie Lam, told the news media on Tuesday that “lawbreaking activities in the name of freedom” were damaging the rule of law and that the Asian financial hub’s recovery from anti-government protests could take a long time.

Her comments came after Beijing said widespread anti-government protests in the semi-autonomous city showed “sprouts of terrorism,” and such violence must be severely punished, “without leniency, without mercy.”