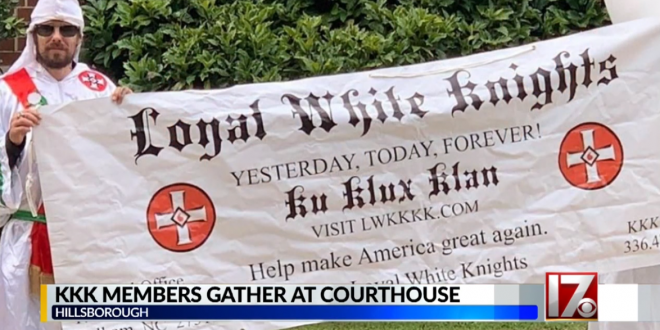 Members of the Ku Klux Klan gathered on the sidewalk in front of the Orange County Courthouse for a demonstration on Saturday evening, quickly drawing condemnation from community members and elected officials at the local, state and national level.

Accounts from the scene showed community members outnumbering the Klan members and white supremacists on Saturday. The scene dispersed around 6:30 p.m., according to a statement from the Town of Hillsborough.

“I am grateful and applaud the citizens of Hillsborough for turning out,” Mayor Tom Stevens said in a release, “for standing by each other, and for standing together to demonstrate to the world that the toxic, KKK, neo-confederate, white-supremacist message has no place in our community. None.”

Today, in Hillsborough, there was a ku klux klan rally outside of the courthouse. pic.twitter.com/6HotIIHlQx

This isn’t a scene from a hundred years ago. This is right now, in front of the Hillsborough, NC Courthouse. Contemporary racism erupts in our backyard. pic.twitter.com/vO102LbLVY

This is a KKK rally in Hillsborough, NC taking place outside the courthouse. This isn’t from decades ago, this is now. Note the MAGA slogan on their banner. pic.twitter.com/TRqVdqZJvV