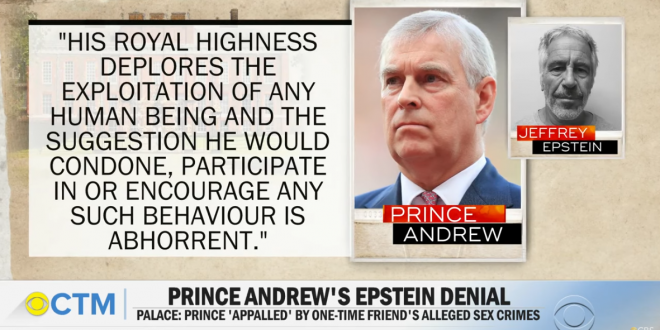 Britain’s Prince Andrew is once again trying to distance himself from disgraced financier Jeffrey Epstein. “The Duke of York has been appalled by the recent reports of Jeffrey Epstein’s alleged crimes,” Buckingham Palace said in a statement emailed to NBC News on Monday, referring to the prince by his royal title.

“His Royal Highness deplores the exploitation of any human being and the suggestion he would condone, participate in or encourage any such behavior is abhorrent.”

The vehement denial that Prince Andrew, 59, had participated in or had any knowledge of Epstein’s alleged offenses came after Britain’s Mail on Sunday published footage that allegedly showed him inside Epstein’s Manhattan mansion in 2010. NBC News was not able to confirm that the video actually showed the prince or that it was shot in 2010.

Previous Danish PM: Selling Greenland Is An Absurd Discussion
Next Trump Explodes At “Highly Unstable Nut Job” Mooch, Who Is A Mental Wreck And Probably Getting Divorced