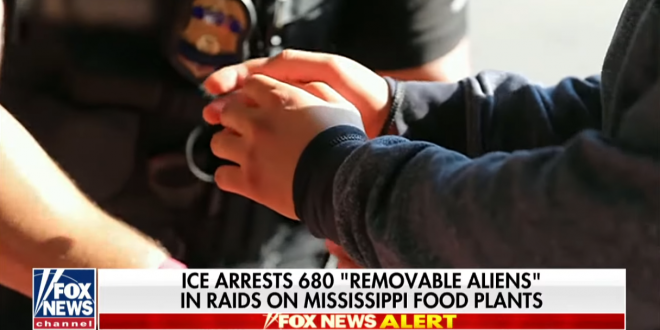 This has got to be a coincidence, right?

Yesterday, ICE carried out what is believed to be the largest immigration raid in decades when they detained 680 workers at seven poultry plants in Morton, Mississippi. The workers, many of them members of the United Food and Commercial Workers union (UFCW), were employed by a company called Koch Foods Inc, which employs 13,000 workers throughout the US. (Koch Foods Inc. has no connection or relation to the billionaire political donor Koch Brothers).

In 2018, following a nearly eight-year-long legal battle, Koch Foods Inc. settled a $3.75 million brought by the federal Equal Employment Opportunity Commission against Koch Food Inc at the plant. The lawsuit alleged that Koch Foods Inc supervisors engaged in both racial and sexual harassment of Latina workers at its Morton, Mississippi plant.

The lawsuit brought by the EEOC against Koch Food Inc’s alleged “that supervisors touched and/or made sexually suggestive comments to female Hispanic employees, hit Hispanic employees and charged many of them money for normal everyday work activities.” Many immigrants rights advocates have speculated that workers are targeted for raids after their facilities get investigated for worker abuse.

There’s much more on this at the link.