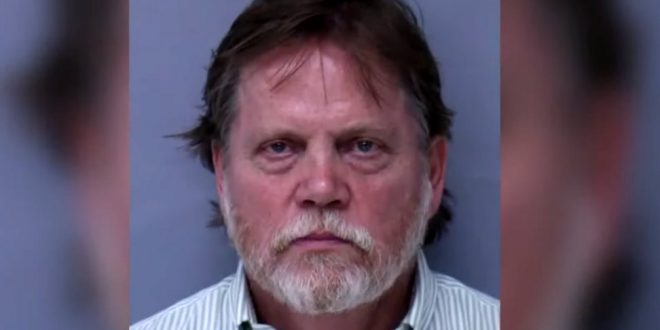 A Florida man was arrested after writing a comment on his waiter’s receipt, then ripping it up and stuffing it down the restaurant manager’s shirt after she confronted him outside, police say. Frederic Sterry Smith, 62, of St. Augustine was charged with simple battery Saturday outside Milagro On 12 Latin Kitchen, in downtown St. Augustine.

Smith and a woman had finished eating at the restaurant when he wrote on the receipt “if he wasn’t gay,” with a zero-dollar tip. The male server showed it to the manager, who walked outside to confront Smith about 6:40 p.m., St. Augustine police reported.

When she asked Smith if he really wrote that on his check, he said yes and then snatched the bill from her and ripped it up. He then grabbed her collar, pulled it open and shoved the torn check down her shirt, touching her breast with his hand, the report said.

Law enforcement officials were contacted, and police tracked down Smith within an hour. When questioned, the man reportedly became “verbally abusive and angry,” denying the stunt.

“I can say whatever I want, to whoever I want!” he cried. Smith’s female companion, who has not been identified by name, echoed “we didn’t touch her,” referencing the restaurant manager. Arrested and charged with simple battery, Smith was booked into the St. Johns County Sheriff’s Office jail and released on $500 bail.

Smith works as a minister and president at Servant’s Heart Disaster Relief, a St. Augustine-based nonprofit and evangelical ministry “devoted to helping hurricane victims in North America and the Caribbean.”