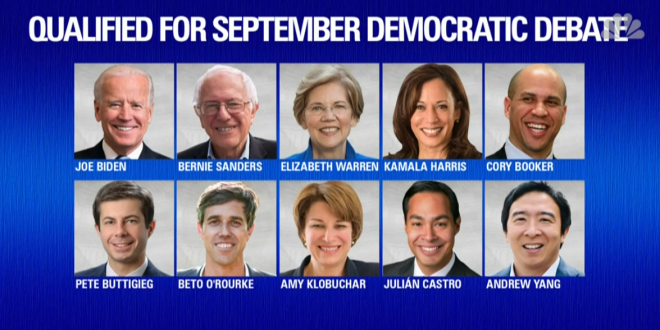 The deadline was Wednesday at 11:59 p.m. Two new polls released in the morning did not change the equation, but it did send reporters and campaign operatives scrambling to discover whether any further polls would be released. By early evening, though, it seemed clear that no 11th-hour reprieve was coming for the billionaire Tom Steyer, who needed one more 2 percent showing to qualify, or for Representative Tulsi Gabbard of Hawaii, who needed two more.

That meant the debate field would be set at 10, and the proceedings would be limited to one night, in contrast to the first two debates that split 20 candidates over two nights and prevented face-to-face showdowns between some of the top contenders. For instance, Senator Elizabeth Warren did not appear on the same night as former Vice President Joseph R. Biden Jr. in either debate.

The September Democratic debate will likely feature ten candidates on stage for one night as the deadline passes for inclusion. https://t.co/BQX9q8BC3f