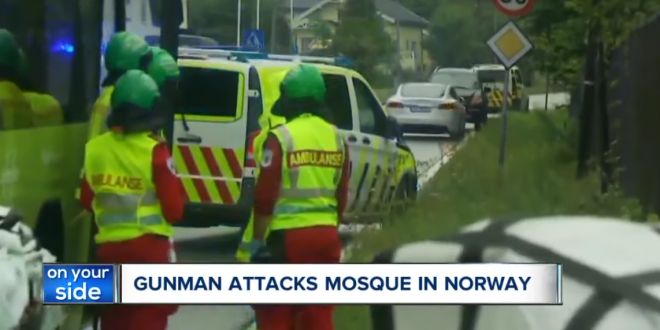 The alleged gunman who launched a suspected terror attack on a mosque in Norway was inspired by the Christchurch, Poway and El Paso shooters, online records suggest. The suspect has not been officially identified by police but was named in reports as Philip Manshaus, a 21-year-old local man.

Hours before the attack at the at the al-Noor Islamic Centre in Bærum in Saturday, a user of the same name posted on the 4chan messaging board. “Well cobbers [friends] it’s my time, I was elected by [Christchurch mosque attacker] saint Tarrant after all,” it said. “We can’t let this go on.”

The post appeared to call for readers to enact their online posts about a race war “irl” – in real life – and said they had been personally “elected” for the task.

A shooting at a mosque in Norway is being investigated as a possible act of terrorism, police say.  A gunman opened fire on the Al-Noor Islamic Centre, on the outskirts of the capital Oslo, on Saturday. One person in the mosque managed to overpower the gunman and was injured in the process. The suspect was arrested after the attack.

Police also charged the suspect with murder after his 17-year-old stepsister was found dead in a separate location. Acting chief of the police operation Rune Skjold said that the suspect, described as a white male, had been known to police before the incident but could not be described as someone with a “criminal background”.

Mr Skjold said that the man appeared to hold “far-right” and “anti-immigrant” views and had expressed sympathy for Vidkun Quisling, the leader of Norway’s collaborationist government during the Nazi occupation.

The Norway mosque shooting suspect is a far-right extremist who was inspired by the Christchurch, Poway and El Paso attackers

In a 4chan post made hours before yesterday’s attack, Philip Manshaus called for more massacres and signed off:”Valhalla awaits”https://t.co/cXgk5RPyEp